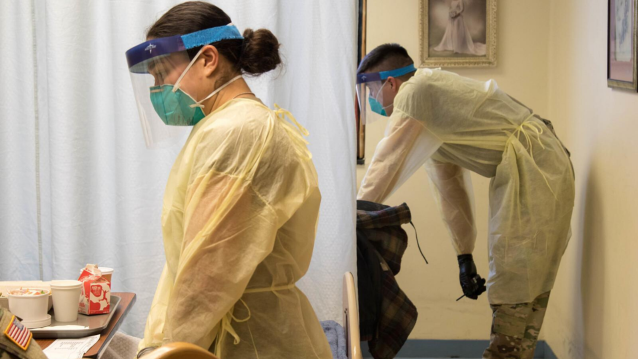 Holyoke Mayor Alex Morse was one of the first people to blow the whistle on the Soldiers’ Home coronavirus outbreak back in March and on Wednesday, the Mayor said “I find little solace in the report commissioned by Governor Baker regarding the Holyoke Soldiers Home or even the subsequent press conference.”

The report commissioned by Governor Baker came after he ordered an independent investigation into the way the Holyoke Soldiers’ Home prepared for and responded to the CD19 outbreak.

76 veterans died from CD19, and an additional 84 veterans and over 80 staff tested positive.

The investigation found that critical decisions made by Soldiers’ Home Superintendent Bennett Walsh and his leadership team during the final two weeks of March 2020 were “utterly baffling from an infection-control perspective, and were inconsistent with the Home’s mission to treat its veterans with honor and dignity.”

Investigators also say in their report that “Walsh was not qualified to manage a long-term care facility, and his shortcomings were well known to the Department of Veterans’ Services.” The report goes on to say that the Department of Veterans’ Services failed to effectively oversee the Home during Walsh’s tenure despite a statutory responsibility to do so.

In their report investigators say that “The most substantial error by the Home’s leadership team was a decision on March 27, 2020 to move all veterans from one of the two locked dementia units (2-North) into the other locked dementia unit (1-North), where they would be crowded in with the veterans already living there. At the time, each unit had some veterans who were COVID-19 positive, some who were suspected of having the disease, and others who were displaying no COVID-19 symptoms. Rather than isolating those with the disease from those who were asymptomatic—a basic tenet of infection control—the consolidation of these two units resulted in more than 40 veterans crowded into a space designed to hold 25.”

One nurse described the move as “total pandemonium.” A social worker “felt it was like moving the concentration camp—we [were] moving these unknowing veterans off to die.”

Speaking to investigators, a social worker vividly described the scene saying “I was sitting with a veteran holding his hand, rubbing his chest a little bit. Across from him is a veteran moaning and actively dying. Next to me is another veteran who is alert and oriented, even though he is on a locked dementia unit. There is not a curtain to shield him from the man across from him actively dying and moaning, or a curtain to divide me and the veteran I am with at the time, from this alert, oriented veteran from making small talk with the confused little fellow. He is alert and oriented, pleasantly confused, and talking about the Swedish meatballs at lunch and comparing them with the ones his wife used to make. I am trying to not have him concentrate on the veteran across from him who is actively dying, or the one next to him who I am holding his hand while he is dying. It was surreal . . . I don’t know how the staff over in that unit, how many of us will ever recover from those images. You want to talk about never wanting this to happen again.”

Investigators in their report showed a systematic failure at the Soldiers’ Home, leading up to the CD19 outbreak and in the early stages of the outbreak. That failure pointed to Superintendent Bennett Walsh and also Secretary of Veterans’ Services Francisco Urena who resigned on Tuesday after Governor Baker asked for his resignation.

Holyoke Mayor Alex Morse on Wednesday said, “The lack of preparation for dealing with this virus is inexcusable.” He Also said that “If we spent even a fraction of what we pay to send soldiers to war on caring for them when they get home these tragedies would be far less likely to occur in the first place.”

At the State House on Wednesday, Governor Baker told reporters “The events that took place at the Holyoke Soldiers’ Home in March are truly horrific and tragic.” He also said “Veterans who deserve the best from state government got exactly the opposite. And there’s no excuse or plausible explanation for that.”